I have posted earlier some data on the gap between real GDP and real disposable income per capita in the U.S. (see here: https://trueeconomics.blogspot.com/2019/08/1819-debasement-of-real-disposable.html) that evidences the longer-term nature of the ongoing debasement of real incomes in the repeated cycles of financialisation of the U.S. economy. Here is another view of the same subject matter: 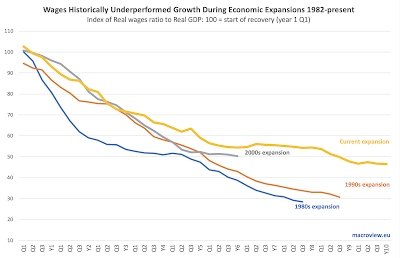 Per chart above, consistent with my arguments in the case of disposable income, U.S. labor incomes have been sustaining ongoing deterioration relative to overall economic growth since at least the 1970s. In fact, the current expansionary cycle (yellow line) shows relatively benign speed of deterioration in real wages or labor income share of total real GDP, although the length of the cycle means that the total end-of-recession-to-present decline of ca 54 percent is deeper than that in the expansion of the 2000s (decline of 50 percent).

A different view of the same data is presented below, plotting historical gap between wages and GDP over longer horizon and showing expansion-periods' averages, contrasted against Trump Administration tenure average: 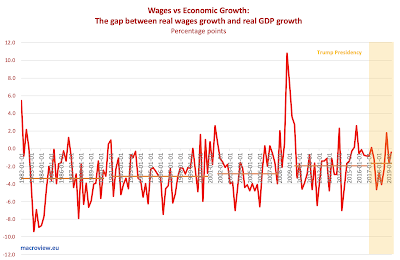 Once again, all evidence points to the decreasing, not increasing rate of wages fall relative to GDP over the years.

Of course, the effects are cumulative, which means that our perceptions of labor share collapse and the amplifying pressure on labor income earners in the economy is warranted.

Posted by TrueEconomics at 8:39 PM