The question of debt relief for households during the periods of financial crises has been a pressing one in the aftermath of the 2008 Global Financial Crisis. I have written a lot on the topic in topic in the past, but to sum the arguments here in a brief format:


I favour the first argument, based on my view that the economy is crucially dependent on households' financial health, and that moral hazard consideration does not apply ex post the crisis, but only ex ante, which means that policymakers can tackle adverse effects of moral hazard after debt forgiveness in the wake of the structural crises.

The paper argues that "the debt forgiveness provided by the U.S. consumer bankruptcy system helped stabilize employment levels during the Great Recession." The authors "document that over this period, states with more generous bankruptcy exemptions had significantly smaller declines in non-tradable employment and larger increases in unsecured debt write-downs compared to states with less generous exemptions. We interpret these reduced form estimates as the relative effect of debt relief across states,... [showing that] the ex-post debt forgiveness provided by the consumer bankruptcy system during the Great Recession increased aggregate employment by almost two percent."

More specifically, the model of debt forgiveness effects developed by the authors "implies that ex-post debt relief had positive effects on employment in ...sectors and in ...regions. Ex-post debt relief directly increases spending and employment in both sectors [tradables and non-tradables] in the high--[debt]-exemption region, which increases tradable employment in the low-[debt]-exemption region through a demand spillover effect. The increase in tradable employment in the low-exemption
region then increases non-tradable spending and employment in that region. Calibrating the model
to the observed path of debt write-downs during the financial crisis, we find that average employment across regions in the second half of 2009 would have been almost 2 percent lower in both the
non-tradable and the tradable sector in the absence of the ex-post debt forgiveness provided by the
consumer bankruptcy system."

Furthermore, the authors "conclude by using the model to conduct three policy counterfactuals. 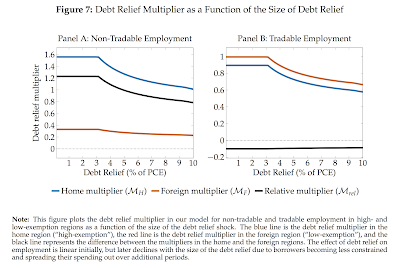 Posted by TrueEconomics at 11:42 PM