Bigger than forecast move by the Russian Central Bank to cut rates (down 50bps against consensus - and my own - forecast of 25bps cut) signals the CBR's comfort with inflationary expectations forward. 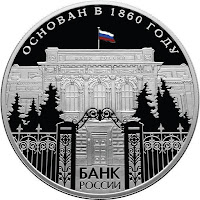 As noted in my regular advisory call on the Russian economy earlier this week (transcript here), inflation fell substantial in 1Q 2017, with current FY 2017 forecast sitting at around 4.3 percent. In line with this, CBR started cutting rates at the end of March, moving from 10% to 9.75% for its benchmark one-week auction rate. Today, the CBR lowered the rate to 9.25%.

According to CBR: "“Inflation is moving towards the target, inflation expectations are still declining and economic activity is recovering. Given the moderately tight monetary policy, the 4 percent inflation target will be achieved before the end of 2017 and will be maintained close to this level in 2018-2019.”

The latest move helps the cause of the Federal budget (championed by the Economic Ministry) that needs to see ruble lose some of its attractiveness as a carry trade currency. In recent months, ruble has been the third best performing currency in the world, resulting in investors willing to borrow in foreign currencies to invest in rubles denominated assets. The net effect of this on the Russian economy is improving demand for imports and deteriorating budget dynamics (as Russian budget operates ruble-based expenditure, funded to a large extent by dollar and other forex revenues from exports of primary materials).

Nabiulina's move today, however, should not be interpreted as the CBR surrender to the Economic Ministry agenda of lowering ruble value. Instead, the rate cut is clearly in line with inflation targeting and also in line with previously stated CBR concerns about investment environment in Russia. Russian aggregate investment has been extremely weak in recent years, and economic recovery needs to involve a dramatic reversal of investment volumes to the upside, especially in areas of technology, R&D, and product and processes innovation. High interest rates tend to significantly reduce investment by making capital expenditure more expensive to fund.