Russian Services and Composite PMIs are out today (Markit) and the results are quite positive.

Remember that Manufacturing PMI for April posted 48.9 compared to 48.1 in March, signalling less pronounced rate of contraction in the sector. Analysis of this is available here: http://trueeconomics.blogspot.ie/2015/05/5515-bric-manufacturing-pmi-further.html

Per Markit release: "The new orders component of the [Manufacturing] PMI was the primary drag on the headline index in April. Total new work fell at the sharpest pace for nearly six years, although the contraction was principally centred on capital goods producers… In contrast, consumer goods companies recorded solid growth… New export orders continued to fall markedly, extending the current period of contraction to twenty months. That said, some manufacturers found that clients were undertaking a degree of import substitution and choosing to purchase where possible from Russian producers rather than those based abroad. …However, there were signs from the latest survey that these …impacts were dissipating."

So key points for Manufacturing were: 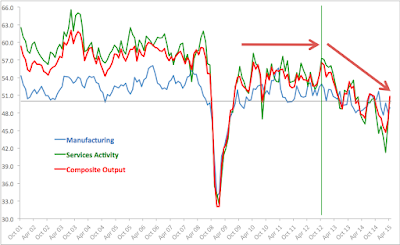 Meanwhile, in Services sectors, per Markit, "seasonally adjusted HSBC Russia Services Business Activity Index… signalled a return to growth in April. The reading of 50.7 (up from 46.1) pointed to a marginal increase in activity at service providers, representing a marked turnaround from the substantial reductions seen in the early part of 2015. …Services companies mainly linked the improvement in activity to higher new orders. New business also returned to growth in April, ending a seven-month sequence of contraction. According to respondents, rising client demand had helped them to secure more new business during the month. …Meanwhile, services companies continued to lower their staffing levels in April, extending the current sequence of job shedding to 14 months. Although remaining solid, the rate of decline in employment eased for the second month in a row and was the slowest since October 2014."

This resulted in the seasonally adjusted Composite Output Index posting 50.8 in April, up from 46.8 in the previous month and above the 50.0 no-change mark for the first time in seven months. This marks second consecutive month of m/m growth in Composite PMI.

More on near-term dynamics of the indices in the following post that will cover BRIC economies PMIs. But overall, we have some encouraging signs of stabilisation in the economy. The signs are still fragile and manifested through moderating rate of contraction signalled in Manufacturing and a marginal rate of growth in Services, with both manifesting over only one month to-date. In other words, we will need much more positive data to confirm any potentially developing upside trend.