Economics 4/7/10: Exchequer receipts: not a sign of any recovery

From my previous posts on the Exchequer deficits, you have probably guessed that unlike other economists, especially those from the official commentariate, I am not too fond of comparing current receipts to 'targets' set out by DofF. This aversion to focus on how closely the receipts are running relative to targets is driven by two factors:
So I've done some homework - manually (because DofF is incapable of delivering usable databases) trolling through Exchequer Statements, and compiling my own database of tax receipts. From now, this will form a stable feature of monthly Exchequer Statements analysis.

Here are some startling revelations from the latest results released on Friday. 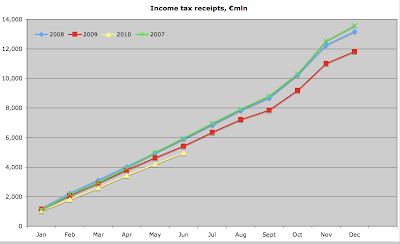 Income tax receipts are currently running behind all years from 2007 on. This is a clear indication that our income tax policy has collapsed. If in June 2009 income tax receipts were -9.02% below June 2007, by June 2010 this difference has widened to -16.82%. And this is despite (or may be because of) higher taxes imposed in Budgets 2009-2010. Mark my words - should the Government increase income tax rates or shrink income tax deductions in the Budget 2011, this effect will most likely increase once again. 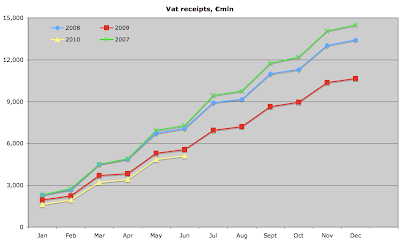 Vat has performed just as poorly so far this year, despite all the parroting going on amongst commentariate about improving retail sales etc. In June last year, Vat receipts were off 23.48% on 2007. This year this difference expanded to -29.63%. And this is despite significant weakening in the Euro and with price wars amongst the retailers. Let me ask Irish banks' economists so eager talking up our consumers' return to the shopping streets. 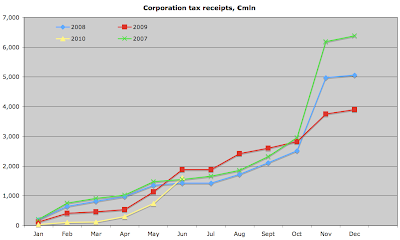 Corpo tax is doing slightly better so far, but there are timing issues here, plus there is an issue of profits booking by the MNCs - rather spectacular in June 2010. Overall, corporate receipts are subject to a massive uncertainty until November figures come out, so let's wait and see. 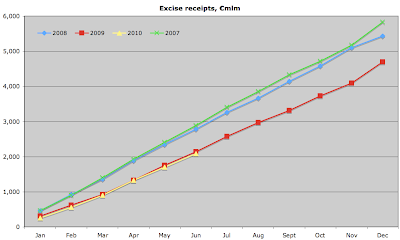 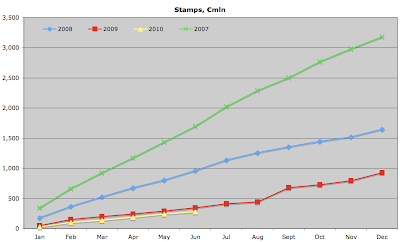 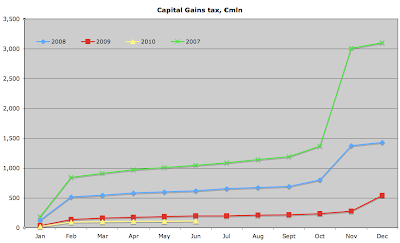 Capital gains tax - should be booming, according to the 'Green Jersey' squads. After all, allegedly we are doing so well now in terms of equity markets that Ireland is having a booming number of millionaires. Remember that claim? Well, CGT shows none of this 'boom' and, of course, QNA shows continuous deterioration in our investment position. So between June 2007 and June 2009, CGT receipts fell 80.98%, by end of June 2010 they declined 89.10%. Surely, things are booming as we roared out of the recession... 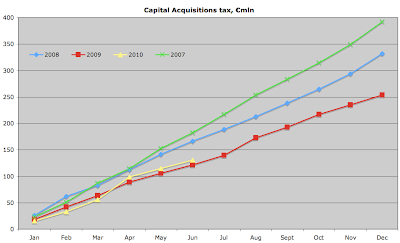 Almost the same story for Capital Acquisition Tax, with this category performance being only slightly better year to date on the back, potentially, of something really strange going on in the Exchequer own capital spending and automatic stabilizers (timing?). 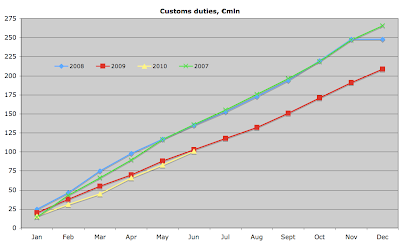 Customs duties are also down, tracing the trajectory of consumption excises.

So let's take a look at the total receipts: 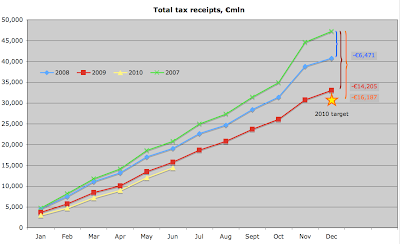 Again, I am failing to see any sort of 'stabilization' in public finances (receipts are running behind 2009 levels), or any significant uplift in economic activity relating to Q1 2010 'exit from the recession'. We apparently had full 6 months of 'recovery' and there's not a blip on the tax receipts radar screen.

So my advice to the 'official IRL economics squad' out there - stop chirping about 'tax heads running close to target'. Look at the actual numbers!
Posted by TrueEconomics at 8:24 AM

Love the charts! and agree that working with DoF data is a pain.

Obviously compared to 2007 and 2008 tax revenues have collapsed, but I would not be as pessimistic as you in denying the existence of some sense of 'stabilisation' in our tax revenues.

The first three months of the year were catastrophic in terms of tax revenue but there does appear to have some degree of relative stabilisation since then.

In the first quarter of 2010 all eight tax headings were below the equivalent figures from 2009. For the second quarter four of the eight tax headings actually outperformed their 2009 returns with VAT and Corporation Tax being the key members of this group.

The abject performance of Income Tax remains, and is likely to continue for the rest of the year, but there are tentative signs of stability in the other key tax headings.

It is still too early to call this a decisive improvement but I think it is one step in the right direction.