Great research note on the impact of the Olympics 2012 on the UK and London economies from Citi. Some snippets: 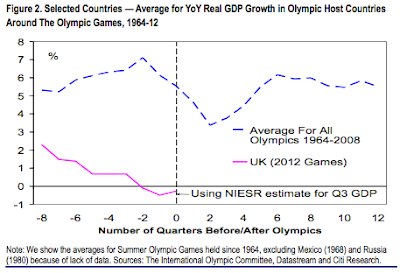 Obviously, starting conditions for the UK economy pre-games were different in nature, but the overall trajectory (controlling for levels differentials) is relatively similar, if only less pronounced in terms of post-Olympics decline in GDP growth. Per Citi: "for all the summer Olympics since 1964: on average, YoY GDP growth peaked about two quarters before the Olympics and then slowed during and after the Games (probably reflecting the end of the Olympics construction programme). The UK has been the first country to host the Olympics with negative YoY growth but, other than that, the economy has followed roughly the same pattern as the average of prior host countries."

Top of the line conclusion from Citi (italics are mine):
"In our view, the Olympics proved to be a fantastic sporting event, but not an economic policy. The clearest positive impact is at a local level, with large YoY declines in unemployment in most Olympic host boroughs. But so far, most indicators suggest that (as in prior host countries) the Olympics did not give the overall economy much boost this year. The boost from construction came in 2010-11, and ended early this year. During the  Olympic period, the number of tourist inflows fell YoY, and most retail guides were weaker. The rebound from the Queen’s Jubilee, plus the direct cost of organizing the Olympics, probably ensured that GDP rose in Q3. But the economy’s underlying path remains weak and — with heavy fiscal drag, poor credit availability plus the EMU crisis — further QE remains likely."

The key here is that about the only positive impact from Olympics is the impact arising from publicly-funded construction, aka a building mini-boom. Interestingly, the support for the economic activity generated by this should be further provided by tourism, which is not happening in London, and did not happen in other host cities on average. Now, consider this in the context of state-funded construction and investment 'stimulus' - in normal circumstances, this will have no associated effect on tourism or other sectors (e.g catering etc) that the Olympics provide. Thus, if the Olympics-related property investment boost is not sufficient to carry the host cities/countries into growth supporting economic development, why would a Government-financed investment boost absent Olympics-associated auxiliary activities do the trick?

Ireland's authorities spent millions on advertising Dublin as the alternative destination for tourism during the Olympics in London. This spending was predicated on their mistaken view that tourism boost in London will be (1) significant, and (2) a relatively proximate destination, like Dublin, can benefit from the spillovers of tourism from London. These beliefs did not correspond to the reality: 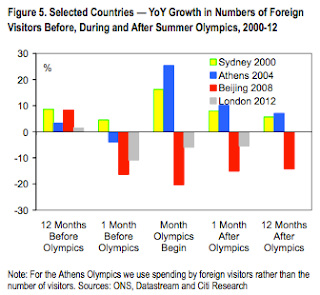 As chart above shows, Olympics actually displaced visitors out of London before, during and after the event, as the did with Beijing in 2008. More importantly, spending around Olympics fell for visitors. 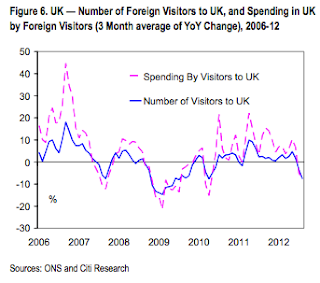 Here's Citi explanation for the lack of Olympics effect:
"At first glance, this conclusion that the Olympics did not give the economy much boost may seem strange, given the huge size of the event and sizeable cost (about £11bn in total for construction and running costs). However, this disconnect reflects two main points. First, most of the cost (about £9bn) reflected construction (stadiums, transport, Olympic village, other infrastructure), and was spent over
several years in the run-up to the Games. Second, although £11bn sounds like (and is) a large amount, it is only 0.7% of annual GDP, and the effect on the economy in any one year is diluted, given that the spending was spread over several years. The Budget for the actual staging of the Games in 2012 was about £2bn, about 0.1%-0.2% of annual GDP and 0.5% of quarterly GDP (of which some was spent in advance of Q3). The BoE recently estimated that prior experience implies that staging the Games would probably boost QoQ GDP growth in Q3 by about 0.2%."

But what about all the jobs generated by the Olympics? Majority of these are, of course, temporary. And even when that is neglected in the consideration, the boost, even locally at the London level, is negligible: 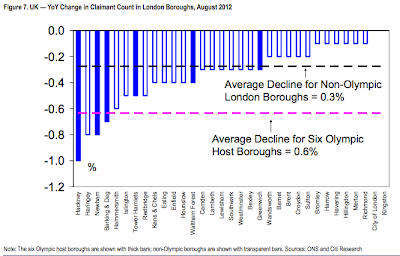 Yep, the margin for Olympic jobs creation is... err... 0.3% on average... frighteningly low compared to the amount of hype that the alleged 'economic benefits' have generated.

Posted by TrueEconomics at 9:39 AM